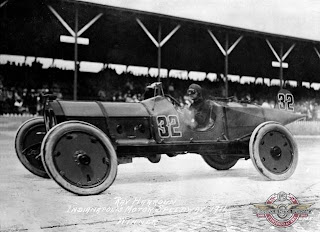 As previously mentioned in Indy Celebrities; it was rough sledding for me while in Indianapolis. Having to meet ‘N greet so many damn celebrities. And last but certainly not least was the REAL Double D. NOT to be cornfused with Derr-Wreck Daily. To whom I’m not sure whether Mr. Davidson would wish to be associated with? Therefore I’ll nickname him D-Squared from now on!

Donald Davidson is a very pleasant chap, originally from England. Naturally his first interest in motorsports was Grand Prix racing, where he learned of the Indy 500 in the mid 1950’s. (Recall that the Indianapolis 500 was part of the Formula 1 calendar back then)

Folklore claims he wowed the crowd in 1964 upon making his first trek to Mecca. Having written to track announcer Sid Collins, Davidson impressed the crowd by; “being able to recite the record of every driver who had ever competed in the "500." After this, Davidson quickly changed his focus to Oval Track racing and the rest as they say is history.

Davidson immigrated to the United States in 1965, promptly going to work for USAC as a statistician, a position he held for 31 years. In January of 1998 he became the official track historian of the Speedway.

As I mentioned, Danny spotted him coming out of his office while we were perusing the Hall of Fame Photo Shop. Upon introducing Davidson to me, we struck up an enjoyable dialogue. As I mentioned that I’d enjoyed listening to his radio broadcast; “The Talk of Gasoline Alley” on WIBC. To which I listened via the internets.

Danny also told him his newest book was excellent. You may wish to check it out: Autocourse Official History of the Indianapolis 500. To which I’ve just received my very own copy from Motorbooks…

Then we launched into several questions. Which soon reminded me of a little ‘ole radio program we have out here in Seattle. It’s called “Stump Slayton.” (KZOK, 102.5 FM) Of which nobody ever stumps the DJ Steve Slayton on Rock ‘N Roll trivia…

I was quite intrigued to discover how the Speedway had gotten its mitts upon Michael Schumacher’s 1991 Benetton-Ford chassis? Davidson coolly responded that they’d purchased it. Yet several race cars are on loan or simply donated by their owners. As many racing cars were either handed down or sold to other teams. Since there was a brief period in history when teams could run older equipment competitively. Yet most racing team owners don’t wish to hang onto obsolete machinery since its just equipment.

Danny then asked about the mysterious Hall of Fame basement collection. To which Davidson remarked is used to hold vehicles in rotation as five cars had just been moved recently. There have been several plans to expand the museum over the years. And it’s been designed for expansion, but things seem to always get in the way. Like the addition of grandstands, etc. Right now it’s on the back burner, but look for it to happen one day.

Next I asked him about the 1972 Penske Sunoco McLaren M16B currently on display in the museum. Telling him I’d seen the exact same Mark Donohue winning race car on display at the Penske Racing Museum in Scottsdale, AZ. Which sparked a startling response from D-Squared. Davidson flatly answered without hesitation; “It’s a replica!” Penske has every Indy 500 winner except for two. *1972, 1981)

Sensing he wished to move along, Danny casually pointed to a picture of an early Speedway roadster parked on a snowy pit lane. Davidson told us that the picture was real. They’d rolled the car out, which was 1 of 3 remaining and he believed it was 90-95% original. Amazing, simply amazing…
For more Indianapolis stories, see; Indy Celebrities
Posted by Tomaso at 8:23 AM