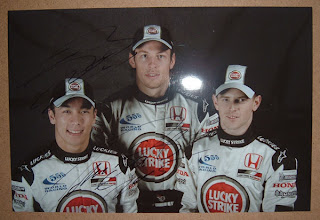 Saturday 10/09
Waking up as Yasushi prepares to go to work we go back to sleep. Waking up several times to the sound of rain, after eating we finally get up around 11AM just prior to Yasushi returning.

Clyde asks if we can take the motorcycle to his shop now. Prior to leaving Clyde spots a large rainbow coloured puddle underneath the van. Following Yasushi in the rain the vans automatic transmission begins slipping and straining to make it’s up shifts. Clyde casually says I hope we can make it to his shop?

Upon arriving we’re greeted by Yasushi’s small Pug (?) that is guarding the building while backing into the shop to unload the “Monkey-Davidson,” Turning around to park the van partially inside to get out of the rain a fresh dark circle of transmission fluid is spotted on the shop floor.

Spotting Yasushi’s “boom-box” Clyde asks if he can put CD’s in? With the tunes cranked Clyde begins jacking up the van to drain the transmission fluid before unbolting its pan.

Examining the thin gage aluminum pan Clyde discovers that along with a few cracks he’s punched a hole through it after driving over the concrete block! Trying to have Yasushi find a wrecking yard with spare parts is hopeless. Since Yasushi makes custom fiberglass parts at his shop, Clyde asks FRP?

Clyde & Yasushi proceed to clean sand and apply FRP to the pan. A heat lamp is placed underneath the pan, requiring an hour to cure. Clyde & Yasushi leave in search of transmission fluid. Finally returning, Clyde is thrilled over the tortures of trying to find fluid! As the rain turns to intermitted drizzle Clyde reinstalls the newly patched pan and adds fluid. A quick road test is made as the sun begins to come out.

With the transmission shifting harder now, we leave to find more fluid after arranging to meet Yasushi at his apartment for dinner at 8PM.

We drive around town searching for tranny fluid, finally finding a gas stand that also services automobiles. After explaining to the supervisor our dilemma, two attendants wheel out a large contraption that pumps fluid. Another 2 liters are required to bring the fluid level back to normal. While there, Clyde has the gas tank topped off along with checking the badly under inflated tires…. The supervisor wants to check the pan, but Clyde explains how Yasushi has fibre glassed it.

Leaving the station around 3:45PM, driving into bright sunlight we pass Suzuka circuito to see if anything’s happening at the track? We’re very happy staying at Yasushi’s after noticing the large influx of campers and how miserable they must have been... Of course we still have no idea of how to get to Yasushi’s. Driving around in circles Nellie tells Clyde that’s the second time we’ve passed the small shrine in the park. Lost in Suzuka,

A few hours later we end up at the Ocean…
Parking opposite the sea wall, we take a stroll along the ocean. Spotting a stairway we step over the sea wall, taking the short steps down to the beach. Walking over the soft ground I notice garbage strewn about. In front of us lays a giant mound of harvested clam shells. Clyde gets his feet wet while examining the empty shells Nellie & I scurry to escape the incoming ocean waves.

Afterwards we continue driving around Suzuka searching for Yasushi’s, finally returning around 7PM. Yasushi asks if it’s ok for his girlfriend to go to dinner with us? To which Clyde replies; As long as you drive!

Sitting in back Clyde tells Erie, I’m Clyde, this is Nellie. And pointing at me he says that’s “ASSHOLE!” Erie repeats very hesitantly, “Ass-Hole?”

Yasushi drives us to a Viking’s restaurant on the outskirts of Suzuka. In the restaurant Clyde asks Yasushi why there’s so many Spaniards. They’re Brazilians; they work at the Honda factory. (Near by Suzuka circuito) After passing the factory on the way home, Clyde & I try asking Yasushi what type of industrial complex are we passing? Oil refinery we’re told, discovering that Suzuka has a sea port.

Continuing my conversation with Yasushi, I ask him about motorcycle racing. (Yasushi races 600CC “scooters” at Suzuka) We talk about Valentino Rossi. Yasushi explains how Honda won the last round. Shortly afterwards Yasushi stops in front of his favourite store, the local Ducati dealership…

Returning to Yasushi’s we say our good by’s. Yasushi leaves with Erie to walk the dog he’s babysitting for a friend. We go to bed early in anticipation of our big day of Formula 1 ahead!