Move over Gordon – Schuey is King of Indianapolis! 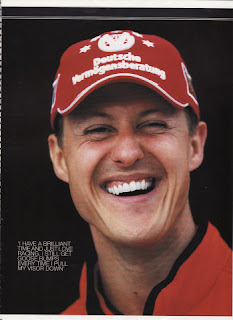 WHEW! Now that Jeffery “Pretty Boy” Gordon has come up short once again – as I was rootin’ for the unlikely debutant ‘RASSCAR victory of Paul Menard’s career this past Brickyard 400. (Sunday, July 31st)

As perhaps it’s just Mwah? But I find it incredibly funny that NOBODY ever seems to mention that somebody ELSE! Has already WON five times at the Indianapolis Motor speedway – and it AIN’T NO IndyCar or ‘RASSCAR driver... NOPE! It’s none other then DER TERMINATOR, nee Seven-times Formel Ein World Champion Michael Schumacher! Which always makes me laugh whenever the mainstream media goes into ‘Uh lather over Jeff Gordon’s perceived chasin’ O history - goin’ for a record five victories at the .

And thus in saluting Herr ‘SkewMawker’s - frenetic ‘Hobbo *David Hobbs) pronunciation twentieth birthday of his Formula 1 debut at none other then the mighty spa Francorchamps, Although once again a ‘Wee-bit late: DAMN YOU NFWHV! (NoFenderz WormHole Vortex...) What better way to celebrate said Anniversary then by scribbling ‘bout another of his numerous Grand Prix feats! As can it already be a further two years since I scribbled;

Y2k (2000)
For the turn of the century, Formula 1 not only returned to the United States for the first time in nine years, but was also making its debutant appearance as a true home of the United States Grand Prix for the very first time ever at the fabled Indianapolis Motor Speedway, albeit the Indy 500 was a round of the Formula One calendar between 1950-60.

Yet it was the polarizing head of the Speedway Tony George publicly announcing having done a deal with Emperor Bernardo, Err Bernard Ecclestone in the fall of 1997 to host a round of “Uncle Bernaughty’s” Formula One circus. And thus, Messer George poured copious amounts of ‘Greenbacks into developing a 2.606-mile 13-turn permanent road course circuit inside the hallowed grounds of the Speedway, as “IRV-THE-SWERVE” (Eddie Irvine) described the venue as a cross between Monaco and Budapest...

And I’ll admit I’ve got hazy memories of that initial USGP – since somehow I was maneuvered outta attending the inaugural event and hence would wait a further year before making the trek to Indy.

Therefore, I was unaware of the mastery of the Finn, nee Mika Hakkinen and McLaren’s devious planning of qualifying third in order to avoid the inferior contact patch traction that Pole would afford by running over the Yard of Bricks... Which reputedly Ferrari’s Jean Todt tried requesting that the Speedway sandblast to make less slipperier – to which IMS said GET LOST!

As about all I recall is that poor ‘ (David Coulthard) jumped the start and was subsequently penalized whilst Hakkinen gifted ‘Schuey his debutant Scuderia Ferrari drivers crown when his Mercedes Benz V-10 went KUHBLAMOE! As Indy was the penultimate round of the championship... Thus allowing Herr Schumacher to run away ‘N hide by a half minute before almost throwing the race away with a spin whilst apparently daydreaming in his office... Yet Michael recovered and made the adoring sea of red Tiafosi wriggle in ecstasy with a Scuderia Ferrari 1-2, as Schumacher led his Wingman, Err Teammate ‘Rubino (Rubens Barrichello) across the Yard ‘O Bricks... 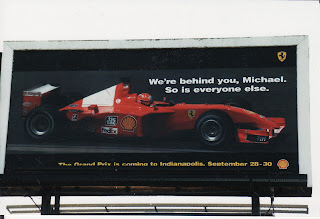 2001
As I’ve previously eluded to – 2001 was the year that I finally made my very first pilgrimage to ‘Mecca – the hallowed grounds of the Indianapolis Motor Speedway, albeit having previously vehemently vowed to NEVER attend the Indy 500 due to ‘lil Napoleon’s (Tony George) nefarious 25-8 rule and “The Split,” since I was a bonafied CART/Champ Car Fanatic despising the IRL – which I quickly dubbed Thee “Indee Retirement League;” but I digress...

And I won’t try recapping my most glorious trek from Coast-to-Coast, albeit it was a magnificent 17-day journey which sounding like a broken record... I cannot believe I still haven’t transcribed my notes onto ze Confuzer; Aye Karumba! Which perhaps if I ever QUIT scribblin’ Fulltime for my No Fenders ‘BLOB I’ll get around to doing, eh?

And thus it’s hard to believe its almost ten years ago now that it was Formula 1 that introduced Mwah to the Speedway – and like almost everyone, I was simply amazed with how FUCKING HUMUNGOUS it was! As I can still recall fondly being in the shiny silver aluminum Turn-1 Grandstand seats on a cool fall day as the engines fired to life for the first practice session on Friday morning...

Interestingly, it was on Saturday whilst standing along the Sand Trapp burms of the golf course... Viewing from the track section of “Mickey Mouse” squiggly infield turns that I recognized the shear brilliance of  a relatively unknown rookie named Kimi Raikkonen, as the 21yr old Finnish rookie who’d later become known as The Kimster and The Original Iceman – sorry Scott Dixon; it AIN’T you! Was driving for Peter Sauber’s Minnowesqe Sauber F1 Team; whilst I seem to recall that Mika Hakkinen got a 2-spot grid penalty during qualifying and hence was demoted to P4 on the grid... As I reveled in Mika’s maladies upon his fastest lap being thrown out after he apparently failed to stop for the red light at Pit-out during the mornings final practice session after having wrecked his car during the day’s warm-up.

This infringement elevated both of the BMW-Williams ahead of the Finn, with Michael’s famous brother ‘Ralfanzo, a.k.a. Ralf Schumacher alongside his elder brother Michael, who was once again on Pole – whilst the crowd darling ‘Monty (Juan Pablo Montoya) moved to P3, directly behind his arch nemesis M. Schumacher. As I can no longer recall if this was the very first time ever a pair of brothers had occupied a Formula One front row? Whilst I do remember that the then mighty brewing company Anheiser-Busch was very keen to tap into the home market and promptly did a dealio with Williams in order to place the word BUD in red letters upon their Airboxes...

And I’ll refrain from too much polemics – other then to say I recall being DISGUSTED by the OVER indulgence ‘O patriotic symphonies for something known as Nine-eleven; SHEISA! With the ONLY bright spot in the exceedingly long Pre-race festivities being John Mellancamps NON patriotic song - although reputedly there were 185,000 paying spectators at the very first sporting event after that mongrel 9-11 day!

And thus; They’re Off! As M. Schumacher made his red car’s flank’s exceedingly wide, hence impeding the progress of Montoya, whom attempted to pass for the lead on the outside, but wasn’t able to complete the move and hence we went gallivanting into the first corner GurrRanimal style – sorta Two-by-Two; with the two Ferraris, William and McLaren’s holding down positions P1-6, albeit the Woking Boyz at the back of this six-car caboose. As the train was red-blue-red-blue-green & white squared: M. Schumacher-Montoya-Barrichello-r. Schumacher-Hakkinen-Coulthard respectively...

And although Michael would let Scuderia teammate ‘Rubino ahead into the lead, making it apparent that the Brazilian was on a 2-stopper strategy, it wasn’t known that Monty’s Wingman Ralfanzo was on a similar fuel strategy himself. Thus, when Juan Pablo went sailing past Michael’s red car on lap-34, the Columbian crowd darling was unknowingly setting himself into a race winning position.

Yet all I really remember ‘bout that sunny day was how the air came rushing outta duh joint, a la der von Hindenburg Gran Zeppelin-style as JPM, aka Juan Pablo Montoya came to a grinding halt upon lap-37? (L38) on the front straight just as he was about to take over the lead and most likely cruise to victory... As the Front straight Grandstands went absolutely silent after previously having been Uh Rockin ‘n Swaying from Monty’s ginormous fanbase; Aye Karumba! As even Mary Ellen was crushed by her Man’s demise! Whilst you’re Humble Scribe was quietly salivating to himself over Monty’s Blue Haze...

And whilst Team Willy and JPM tried vainly casting off his retirement as a “Cough-Cough, Nudge-Nudge” (E-lectronical?) Hydraulics failure, I fondly recall believing that Monty’s Blitzkrieg pace had made his Bavarian motor unit go KABLAMOE instead! Although there was NO denying that Rubinoes Ferrari ‘lump indeed went KABLAMOE! Heartbreakingly just two laps from the end, hence elevating Schuey to runner-up and an unexpecting Scot to P3...

Thus, it was to be Mika-the-Finn’s day instead – which seemed like poetic justice for the FIA Stewards having taken away his swagger, Err Fastest lap time the day prior for his red light infringement – Honest Ossifer – I didn’t see duh light! As I can still fondly hear Mary Ellen telling everyone how unexpectedly happy I was to witness Hakkinen’s triumph... As little did I know then it would be the Finn’s final Grand Prix victory in his Formula 1 career! 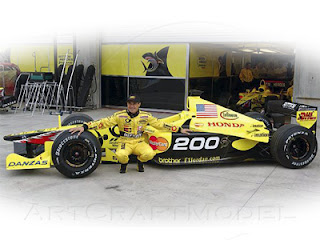 While I’ve also forgotten that it was Jean Alesi’s 200th Gran Primo race – capping his star-crossed career for EJ’s team, (Eddie Jordon) as Jean’s teammate Trulli Scrumptious, nee Jarno Trulli’s DSQ (disqualification) from fourth place would gift the Frenchman one point upon being elevated to P6 in his fourth outing for the slowly declining Irish F1 team...

2002
The third USGP at will certainly be remembered forever as the year of Michael Schumacher’s infamous “Staged” DEAD HEAT Finish GAFF! Where upon swinging - Swing Low Sweet Cherry, Err wide on the final corner of the races last lap saw the German come up 0.011-seconds BEHIND his unsuspecting Wingman ‘Rubino on the timing monitors... Which was somewhat of a surprise, since arguably Barrichello was always slower then Michael! As I seem to remember SCREAMING at la Telescreen in ‘Udder disbelief - musing to myself what an F%%KING FARCICAL FINISH! As surely this must be payback for that absolutely DISGUSTING Team Orders finish earlier that year at , right? You know when Rubens was instructed to pull over on the final lap whilst leading to enable Herr Schumacher to win while he was dominating the point’s table enroute to his third-consecutive World Championship for Scuderia Ferrari...

And what in the late 1980’s was referred to the Big four in terms of Constructors - the players had not really changed much with the exception of whom the fourth member of this elite grouping was?  As I’d haveda say , albeit I think the reconstituted Renault F1 Team was nipping at EJ’s heals... As perennial Champions Ferrari, Williams and McLaren were singing that ‘

Ol Sesame Street
song: Which ‘Juan of these (4) DOESN’T look like the other...

As la Scuderia’s season Dominance was apparent with a Ferrari Front row lockout, with team leader Schumacher heading Barrichello. Row-2 saw a pair of Michael’s arch nemesis directly behind him - with ‘Ol SquareJaw (Coulthard) in P3 and JPM Kitty-corner in P4. Row-3 saw DER TERMINATOR’s famous brother Ralfanzo on the inside and rising FINN star Kimi Raikkonen - who’d taken over fellow countryman Mika Hakkinen’s seat on the outside.

Yet the race was really never in doubt until Michael’s FLUB, Err last-lap mistake, as the red cars once again ran away and hid - while Ralfanzo punted rival teammate Montoya on the second lap, as an incredulous Patrick Head watched his Team Willy Boyz performing synchronized pirouettes... With eventual third place finisher DC being concerned over his Mercedes going up in smoke the entire race, while his junior teammate Kimster’s ‘Merc did indeed go KABLAMOE after sputtering round on nine cylinders...

And it was another good crowd with 150,000 in attendance - not too shabby for a Grand Prix race, albeit a drop of 35,000 paying customers from the year before...

And I’d completely forgotten this but the funniest moment (excluding De la Rosa) for Mwah was the latter report of Track Marshals inadvertently directing Jaguar driver Pedro de la Rosa to jump over the barricades during the ‘JagWah’s fiery exit us from the event. The Rub? There just so happened to be a six-foot drop into a drain; OOPS! Sorry ‘bout Dat Pedro - guess we forgot to tells Yuhs ‘bout that drainage ditch below, eh? (FUNNY SHIT BATMAN!)