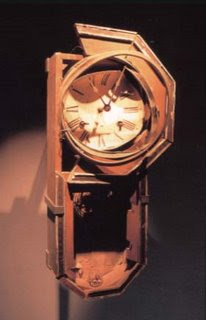 Imagine a time when it all began
In the dying days of a war
A weapon that would settle the score
Whoever found it first would be sure to do their worst
They always had before...
(Lyrics” RUSH; Manhattan Project, Power Windows, 1985)


Time Stands Still (2008)
Nagasaki photographs
Although I try to refrain from the topic of mainstream politics, I’m sure you’ve noticed that I’ve been voicing my opinions a little bit lately, and I’m quite happy that this will be the final Veteran’s Day under the Bush regime...

Thus, it’s hard to believe that it’s already been one year since I had those most appalling thoughts while sightseeing in Japan, now having been to both World War II Atomic Bomb sites; Hiroshima, 2004 and Nagasaki, 2007. Obviously both sites are different, yet both were civilian targets with Hiroshima being a larger city than Nagasaki. Actually Nagasaki wasn’t the primary target on that fateful day, it was a back-up target picked when Kokura was blanketed by dense clouds, obscuring the city.

With Boxcar, the second B-29 bomber assigned to carry a nuclear bomb, being low on fuel and making only one pass over the target before dropping its lethal cargo at 11:02AM. As the bomb detonated above an unsuspecting tennis court...

Thus, I suppose it’s ironic, that the Hanford Nuclear facility, here in the state of Washington, which was built in 1943 specifically for the Manhattan Project was responsible for producing the very plutonium needed for the “Fat Man” bomb...After driving from Sasebo to Nagasaki, Tanja, Albin & I hopped aboard a Tram (Street Car) and rode to a nearby Atom Bomb museum stop. The museum is of an interesting design, as we walked down a continuously spiraling carpeted walkway, into the bowels of the museum. There are several artifacts on display, beginning with pictures of the city prior to the blast. There’s a picture of an entire city street, a school, temple, farming, horses, etc. Then there’s the clock with its hands frozen at 11:02AM, retrieved from a house approx. 3 kilometers from the blast. There are several items of glass & metal that are either twisted, bent or fused together from the bomb’s massive heat. There’s even a piece of roofing you can touch, which shows the affects of the intense temperature afflicted on the ceramic tile. There’s a single wall left of the church that was destroyed in the holocaust, as well as a counterpart of the horrific plutonium core bomb of the original “Fat Man” weapon used on Nagasaki. It’s gigantic and I think it weighed 4,000 tons. Reports differ over the total effects of the atomic wasteland, as Nagasaki like Hiroshima three days earlier was pulverized. And although it was known that the bombing could instantly kill everyone within a 4 kilometer radius, the then unknown effects of radiation were not understood. As countless scores of people simply died in other towns listed as; Dying, causes other than Atomic bombing… There are several gruesome pictures of dead bodies and injured people, as Nagasaki’s population was approx. 240,000 at the impact of Fat Man. Imagine in just 30 seconds, the bombs horrifically radiant heat killed over one-fourth of the population. Another one-fourth was injured along with countless thousands left homeless! Blast damage occurred as far away as 15 kilometers, with shrapnel flying as far as 8 kilometers. The city was leveled 2.6 miles approx. (radius) with anything black catching fire up to 4 kilometers away. As all of the telephone poles left standing were charred on the side facing the blast! On display, a section of wall recovered is quite intriguing. It too was also 4 kilometers away from the blast. Yet the bombs flash and heat was so bright and hot that it fused a man’s shadow and piece of leather into the wall! There’s also the shadow of a picket fence on the wall along with the image of leaves fused into a piece of wood… Various exhibits with time lines of the history of the Manhattan Project are interspersed with other related events. There’s current day Atomic statistics, like every Nations projected nuclear arsenal with Russia listed at 16,000 weapons followed by the US at 10,000. And there’s a display listing every Nations atmospheric and underground Atom bomb tests since WWII. Yet the most chilling display to me was the current day Nuclear weapons facilities, since this included Hanford, WA. I suppose why it sent a chill up my back was because it was the only video playing in English, as person after person discussed the devastating health effects of the “Down-winders.” Ranging from damaged Thyroid’s, cancer and multiple birth defects! (40+ years after being built) Which the U.S. Government is still denying, although supposedly it has now actually admitted that it did indeed release “Mega” amounts of radioactive toxins into the surrounding environment, as Hanford is now the nation’s WORST Nuclear site, containing 53,000,000 gallons of radioactive waste; the nation’s largest amount!

Hanford was responsible for producing the majority of plutonium utilized for our nation’s 60,000+ nuclear weapons, before being decommissioned at the end of the cold war and is currently the nation’s largest toxic waste Super-fund clean-up project...Next we walked to the adjoining Peace Park, which features an elaborate display at Ground Zero, with the grass lawn being interspersed with concrete rings leading inwards to the huge 10 meter tall peace statue adorned by a black marble vault containing the names of the atomic bomb victims and survivors who died in subsequent years. A plaque gives the following statistics:

Dead: 73,884 Injured: 74,909 Sufferers: 120,820 Houses burned down: 11,574 Houses half-ruined, 5,509 Houses partly damaged 50,000
At the south end of the park is a giant flowing water fountain. This Fountain of Peace was created in 1969 giving prayer to all of the people who perished in the bombing while vainly searching for water. At the base of the fountain is a black stone plaque with Lines from a poem carved into it. They were written by a girl named Sachiko Yamaguchi, who was nine at the time of the bombing, It reads:
"I was thirsty beyond endurance. There was something oily on the surface of the water, but I wanted water so badly that I drank it just as it was."
Hiroshima-Nagasaki Atomic Bomb Exhibit (2000)
Posted by Tomaso at 7:39 PM