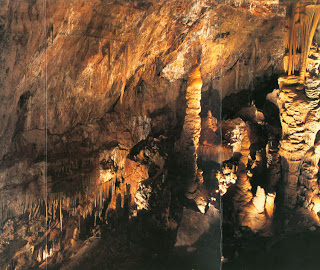 Howdy Y’all... Yeah, I know it sounds like a broken record... Or should that be CD? As your humble scribe has just returned from a most pleasant trek to the “Valley of the Sun,” where not only does “Mister Jeff,” a.k.a. My name is IRL pontificate, but alas, some other heady big name racin’ type’s like Buddy “Hot Rod” Rice and Princess Danicker reside.

And NO! I did NOT go down to partake in the just recently completed RASSCAR yawn-fest at some ‘lil ‘Ol race-em track named PIR; Phoenix Int’l Raceway... Although it was suggested that I may wish to change my site’s handle to “BENT FENDERS” over all of my alleged interest in those stock car Bombers!

Yet, I did indeed ride past some ‘lil ‘Ol joint off of Interstate 10 named Firebird Raceway, where Bob Bondurant’s high performance driving school is based, enroute to check out the magnificent Kartchner Caverns.

And did you know that the Arizona Highway Patrol even pulls over “Ply-Mouth” Voyager mini-vans... As we encountered the long arm of the law in one of the numerous speed zone changes along this stretch of I-10; is it 75, 65 or 55mph now? As the constant changing of speed limits in a non-existent construction zone make for plentiful poachin’ of would-be lawbreakers...

Yet, it’s the very first time ever I’ve seen an “Ossifer” of the law amicly partake in idle chit-chat about our just concluded trip to the caverns and compare notes on Kartchner vs. Colossal Caverns... As he told us he’d most likely be giving us a warning for going 80-83mph in a 65mph zone; OOPS!

And walah, after awhile of checking our Voyager’s chauffer’s rap-sheet, we were indeed lucky and absconded back on our way towards Scottsdale with simply a warning ticket, as the five passengers spent the rest of the trip hollerin’ out every single speed limit change... “It’s 45! It’s 45! We’re in another construction zone.” So, better slow that Ply-Mouth down...
Posted by Tomaso at 9:13 AM