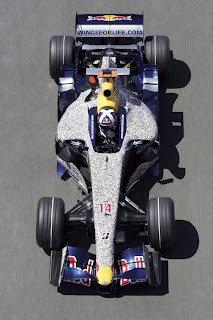 And while Scott Speed was shooting his trap off on Speed Freaks, as you probably already know, this past weekend’s running of the Formula 1 season finale in Brazil, marked the end of F1’s elder statesman David Coulthard’s career in Grand Prix, after having made 246 starts and winning 13 races...

Thus, I think its pretty cool that DC was granted approval by all of the Formula One teams to run a special liveried white race car to mark the occasion, with the Red Bull Racing chassis not only celebrating David’s final Grand Prix, but paying homage to DC’s charity; Wings for Life.

Although it was a bit ironic as SPEED’s Peter Winsor interviewed the Scot after his first lap accident, that DC mused” “I started my F1 career with Williams and I ended my career with Williams...” As NOT one, but both Williams-Toyota’s played pinball with Coulthard’s RBR racecar.

But as for his charity salute; Good on you, mate!
Posted by Tomaso at 9:36 AM